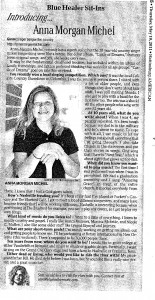 Anna Morgan was recently interviewed by Sam Miller for the Hattiesburg American. The original article can be found online here.

Anna Morgan Michel not only has a superb voice, but the 10-year-old country singer makes songwriting seem like a breeze. Her debut album, “Castle of Dreams,” features seven original songs, and yes, she wrote every one.

It may be the fundamental childhood troubles, but included within an album of family, friendships, and faith is profound thinking that works for all age groups. “Castle of Dreams” goes on sale this weekend.

You recently won a local singing competition. Which one?

It was the local Colgate Country Showdown in Columbia. I was the youngest person there. I visited with a lot of older people, and even though they don’t write about kids stuff, I was still making friends. I also got to play with a band for the first time too. The win was a shock! All the other people who sang were over 21 years old.

At 10 years old, what do you write about?

When I was 4, my parents separated. It’s been tough because my dad is in the military and he’s about to move. To cope with it all, I use music to let my feelings out and tell everything that I’m going through. I also take friends in the classroom and put their stories in songs. One song that I have is “Next Year,” which is about a girl that grows up too fast.

When did you know you wanted to play music?

The first time I ever performed was when I was in pre-school. We had a graduation ceremony and I sang “Amazing Grace” in front of the entire church. It shocked everybody. From there, I knew that I had a God given talent.

It’s been really fun! I’ve played at Puckett’s Grocery and The Bluebird Café. I got to meet a lot of different songwriters, and many have become friends that I will be working with soon. Nashville is interesting because when performing at The Bluebird for example, you can’t play any covers, so I get to play my own songs.

What kind of music do you listen to?

I listen to a little of everything. I listen to mostly country and gospel. I really like Jessica Andrews, Martina McBride, and Nicole C. Mullen. I also like some older stuff like Lynyrd Skynyrd and Journey.

What are your short-term goals?

I’m mostly working on getting my album out and getting people to know me. I’ll be performing at Rotary International in New Orleans (this weekend). There’s supposed to be 30,000 people there.

Ten years from now, where do you want to be?

I would like to go to college at either Vanderbilt or Belmont and major in music or graphic design. Eventually, I want to sing on the Grand Ole Opry stage and have a farm in Nashville or Franklin, Tenn.

Either dead or living, who would you like to ride the river with?

My great-grandfather Bill. He died right before I was born, but he sounded like a really nice person and a great musician.

Sam would love to ride the river with you. Contact him at sam@bluehealermusic.com.